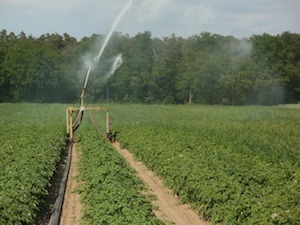 Statewide, farmers have practiced and made strides with sustainable farming methods over the past 25 years, Sen. Annette Sweeney, said. | caitlin.nordahl@gmail.com

"We're doing fabulous things with water quality. Soil erosion over the last 25 years has decreased," Sen. Annette Sweeney, (R-Dist. 25), said. "So has the spraying of herbicides and pesticides."

Sweeney should know: She farmed up until two years ago when she made a bid for a Senate seat. Sweeney offers a unique perspective. Not only did her parents grow corn, soybeans, oats, alfalfa, barley and wheat on their Alden farm, Sweeney still lives in the house she grew up in.

"For anyone who owns a farm, you want to be able to leave it to the next generation. If a person you're leasing to does not use good practices on your land, it won't yield," she said. "We want to keep our nutrients in the soil and practice a nutrient-reduction strategy, first, for water."

Sweeney says this is what the Agriculture Committee deems "sustainable farming" in Iowa. And despite a recent PBS "Newshour" report on increased run-off, flooding, and nitrate- and phosphorous-pollution to its groundwater, Sweeney, a member of the South Fork Water Alliance, says "There is no increase. Everything there is a reduction."

When asked if it is past time to move away from the traditional corn and soybean planting on Iowa farmland for a more diversified crop rotation, Sweeney says, "It depends on what kind of farming you want to do." Up until three years ago, Sweeney farmed alone. In 2013, the Iowa Department of Agriculture presented her with its Environmental Steward Award.

"I wish there were some groups that would look at what was done in the ’40 and ‘50s. Today’s farmers are very savvy and working very hard," Sweeney said. "Farmers are doing a great job with nutrient retention, cover crops and putting in more buffers. Great improvements are going on here in the state of Iowa."

Four generations ago, Sweeney said 1940s and '50s-era farmers were told what to plant and how to plant it. The "Dirty 30s" was an era of soil loss in a time when tilling was king. This changed in the late-1970s and early '80s, she said, when better knowledge yielded gentler stewardship practices.

Sweeney's father-in-law was a showcase conservationist in the 1960s. He even won a state award for his progressive farming practices.

County field days brimming with the latest data on best water quality practices and the state's soil nutrient-retention strategy have made the rounds across Iowa for 10 years, Sweeney said. Legislative outreach includes periodicals, speakers, extension posts, forums and classroom venues to learn more about preserving the land and its water.

Want to get notified whenever we write about State of Iowa ?

Sign-up Next time we write about State of Iowa, we'll email you a link to the story. You may edit your settings or unsubscribe at any time.