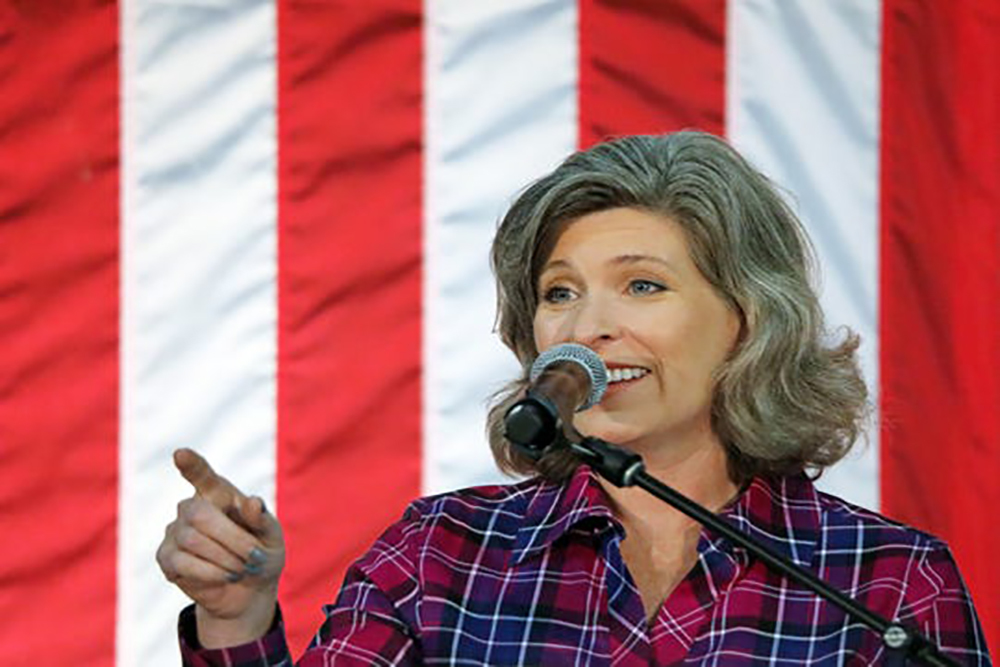 U.S. Sen. Joni Ernst and Gov. Kim Reynolds on Friday shared details about their personal struggles during a Republican Party event in the Cedar Rapids area.

The crowd of about 100 people listened as Ernst recounted alleged abuse by her ex-husband and Reynolds described seeking treatment for alcoholism when she was a county treasurer.

Both women have spoken publicly about their experiences before, but it's rare for them to do so together in front of an audience. Party organizers said they could not recall a similar event.

Ernst said it was "hard" for the details of her divorce from Gail Ernst to be made public earlier this year. The couple, married for 26 years, announced their divorce in 2018. It was finalized in January, opening up court records that said the senator alleged mental and physical abuse by Gail Ernst.

He has denied allegations made in the court records, including that he had an affair during their marriage.

"It was very hard for me," Ernst said at the event, which was located on a farm property. "And to have that publicly paraded by the media, you know, things and issues that I wanted to keep private, and I became fodder. You know, really. And my hardships … people took joy in that."

Reynolds described herself as a "recovering alcoholic" who has been sober for nearly 20 years. She said she sought treatment after she was arrested twice for drunken driving. The arrests happened years before she was elected a state senator, lieutenant governor and eventually governor.

"It took a long time to forgive myself," Reynolds said. "But that was part of the healing process."

Both women made the remarks separately in response to a question from Republican Party of Iowa Chairman Jeff Kaufmann, who led a discussion between the three of them on a small stage. Kaufmann asked them about a "high" moment and a "low" moment in their lives.

Ernst referenced her work as a public official in describing a high moment, and Reynolds spoke of her family. Then both women offered the details that they described as low moments.

Ernst said she was comforted by the support she received after the specifics of her personal life were made public. She told Bloomberg in January that she was raped in college.

"After the revelations at the beginning of the year, whether it was my rape in college, whether it was the abuse at the hands of my husband, I had so many people that wrote to me and said, 'Joni, I've been in your shoes. And thank you for putting a face on this, whether you wanted it or not,'" she told the audience. "… God bless everybody that's been in that situation, but I am truly blessed to have a family and friends that supported me through all of that. So, in the darkest of hours, there was a silver lining."

Ernst was elected in 2014 and made history as the first woman from Iowa to be sent to Congress. She is seeking reelection in 2020.

We've been the news Iowa depends upon since 1849. Help us continue our mission.

Reynolds is the first woman elected governor of Iowa. She began a four-year term in January. She said she's tried to use her experience with addiction as a way to talk to others about second chances. She specifically noted a day that she spoke to inmates at an Iowa prison.

"I stopped and I went off script … I told them, 'I'm a recovering alcoholic. It took two DUIs for me to realize I couldn't do it on my own … you can turn your life around and things can be better,'" she said.

Reynolds has prioritized efforts to improve the criminal justice system in Iowa, including restoring voting rights for felons who complete their sentences. The governor has been unsuccessful so far in procuring enough support from Republican lawmakers in the Legislature, but she plans to try again. She announced recently the creation of a working group tasked with proposing ways to improve resources for people leaving prison and re-entering society.

Barbara Rodriguez covers health care and politics for the Register. She can be reached by email at bcrodriguez@registermedia.com or by phone at 515-284-8011. Follow her on Twitter @bcrodriguez.

Original source can be found here.

Want to get notified whenever we write about FIRST DISTRICT CONGRESSIONAL DEMOCRATIC IOWA ?

Sign-up Next time we write about FIRST DISTRICT CONGRESSIONAL DEMOCRATIC IOWA, we'll email you a link to the story. You may edit your settings or unsubscribe at any time.